Mi versus Galaxy – sounds like a sci-fi epic. It may turn out to be epic alright, but the battle is on terra firma, in the world’s second largest mobile market, India, between China’s

Mobile brand battles are nothing new. But the festival season combat between Xiaomi and Samsung will be the fiercest because it’s a fight between two determined equals, which account for 60% of the market. Festival season sales contribute typically a third of handset maker’s annual revenue. So, stakes couldn’t be higher.

By the way, even experts don’t know right now who’s no. 1. For April-June, Counterpoint put Samsung ahead of Xiaomi, IDC had Xiaomi ahead of Samsung, while Canalys had Xiaomi and Samsung neck and neck.

Both companies are fighting with over 10 million-unit shipments a quarter — over three times the volumes back in 2014-15 — and both are backed by strong local production. 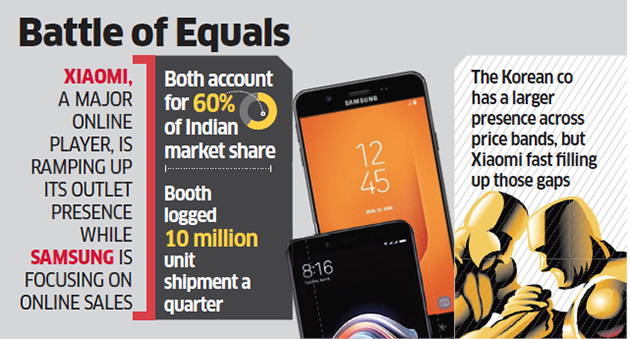 The two bosses have different takes. Xiaomi India head Manu Jain told ET the company is not bothered about the top spot till the time it is on a growth trajectory. “We did 10 million units in the quarter, which was a milestone. I don't think there's any reason for anyone to say we haven't done well or have made some mistakes.”

DJ Koh, Samsung’s chief executive for IT & mobile communications, said the company has always faced competition in India. “We are watching them (competition) but we are not changing our strategy or road map. I strongly believe we can win in India.”

Xiaomi, red hot online, is ramping up its brick-and-mortar presence through Mi preferred partner outlets. Samsung, strong in brick-and-mortar stores, is focusing online, with more customer incentives. The Korean company has a larger presence across price bands, but Xiaomi is filling those price gaps too, and has declared its intent to tap premium segments – priced over Rs 30,000 – with its POCO subbrand, where Samsung has traditionally dominated, with Apple.

“The competition is fiercer this time as both Samsung and Xiaomi are adopting multi-channel strategy to grab a larger pie of the market in the budget to mid-segment range. In the coming quarters, the competition will intensify between these players,” said Anshika Jain, an analyst with Counterpoint Research.

“Both vendors are primed to ship 10 to 12 million units, with both winners in the Indian market,” Canalys research manager Rushabh Doshi said. One of the key differences between Samsung and Xiaomi is that the former can offer fat margins to retailers while the latter’s margins are thin, but volume is high.

Margin tweaking was one of the main reasons of Samsung’s success in April-June. And this remains a formidable festive season strategy, market players say. Xiaomi, on the other hand, as many of its offline partners say, sells fast across its models. The key question, one strategist speaking off record said, is whether Samsung’s wide footprint and deeper brand connect will counter Xiaomi’s aggressive marketing to younger customers.

Upasana Joshi, and IDC analyst said both brands have majority portfolio in the sub-$300 band, which makes them very popular and competitive. No one’s guessing the winner of this mobile war.