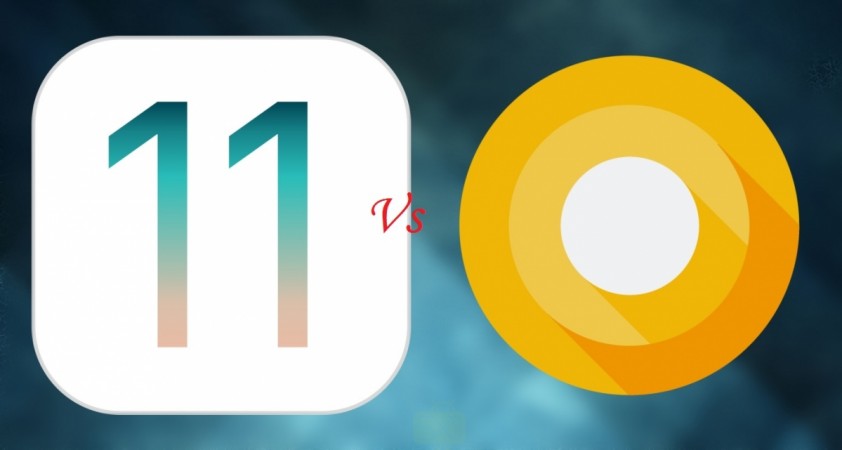 Google announced the official rollout of Android 8.0 Oreo on Monday, and Apple walked us through iOS 11 for the iPhone back in June. Combined, these software platforms will power practically every phone in the world. So which one's winning?

Here's why. Google is killing it on AI -- that's everything from its Google Assistant to a cool-looking feature that can copy a Wi-Fi password when you point the camera at it.

Apple isn't dead in the water by any stretch. It has a chance to catch up if it's able to make AR -- which mashes up virtual items with the actual world -- seriously mainstream.

Winner so far: Android Oreo. Picture-in-picture and the enhanced copy/paste are little things that can go a long way in making the phone more useful day-to-day. And unlike iOS, Android phones could already play music from the phone to multiple speakers (as long as they're Chromecast-compatible).

However, peer-to-peer payments in iMessage is a great addition to the native messaging app (which Android lacks on all phones).

Apple has Siri and Android has Android Assistant (and Google Voice Search and Google Now). Siri gets a bunch of updates to make it look better, give it a new male voice and guess what you might want to know next. Google Assistant will get a mode that can identify objects (called Google Lens) and the ability to type queries, not just speak them.

Winner so far: Android Oreo, even though voice additions are ho-hum. The underlying platform is so much more expansive, accurate and knowledgeable than Siri. At WWDC, Apple missed an opportunity to showcase the digital assistant it helped make a sensation in the first place. It'll have a chance to redeem itself in September during the expected reveal of the new iPhone(s).

iOS 11 refines iMessage with an app drawer, but adding Apple Pay is the big star. Google lacks an all-in-one messaging app on Android phones. Android Messages is your standard (and basic) texter. Hangouts, Allo and Duo are much more specialized.

(Android does have P2P payment with Google Wallet, but you'll need to install and set up the app.)

Since Apple controls both hardware and software, it doesn't have Google's problem of needing to create one operating system for hundreds of different devices made by dozens of brands. But that also means Google is more proactive about sharing its plans to make its OS faster and improve battery life.

Winner so far: Android Oreo, maybe. Google claims Android Oreo is more than twice as fast as last year's OS, and boots up faster, too. It's also done behind-the-scenes work to preserve battery life. Apple hasn't highlighted these improvements, but its devices don't face the same kinds of issues. We'll have to compare the next iPhone with the next Pixel to see how battery life and speed shake out.

Apple has redesigned iOS 11's lock screen, Control Center, Siri interface and app store. Android Oreo has a few visual tweaks here and there, but not to iOS' scale.

Winner so far: iOS 11. We like what we've seen for far -- especially with the refreshed Control Center -- but we're dubious about how the new App Store will pan out.

Android is years ahead of Apple with both augmented and virtual reality -- it has Google Daydream for VR, Tango for AR, and recently announced a standalone headset. Apple is just getting its feet wet with AR, but the company claims it'll have the world's largest augmented reality platform when it launches its ARKit developer platform later this year.

Winner so far: Android for VR. AR could be up in the air. Google's Tango project is still slow to get underway. If Apple makes good on a rumor that the iPhone camera will get AR capabilities, it could leapfrog Google's progress.

Apple and Google are both pouring a ton of research into AI (artificial intelligence), to make their digital assistants and tools smarter and more context-aware.

Google is also working on projects likeInstant Apps, little mini apps you can open without downloading a thing. It isn't technically part of  Android, but will find its way into phones. I was impressed by the concept of Google Lens, which lets you identify objects on the fly, among other things.

Saving the best for last?

It's not over yet. Google and Apple are notorious for saving some OS features to reveal alongside their new flagship phones.

Right now, Google's software for phones pushes ahead in important ways, but Apple has one more chance to wow us. It's 10th anniversary iPhone is rumored to have sweeping changes. It's just the sort of debut where you'd want to save the best new software features for last.

So Apple's AR code could transform into a killer feature on the next iPhone's camera. Or, if Apple does wind up ditching the iPhone home button, more hands-free Siri tricks could come to the fore.

Those are moves Apple would want to keep tucked away until the big moment when it can stick it to Android Oreo. Unless Android Oreo on the upcoming Pixel phone hits back with a final jaw-dropper of its own.

We can't wait to see if this all unfolds.