Here's the 3-in-1 modular lending phone: Could it really be the way ahead? Most of us don’t want to hand our phones over to anyone—no matter if it’s a family member or a stranger. What if there was a way you could share your phone with someone else without having to really relinquish control of it, though?

That’s the question behind a prototype built by researchers at the University of Calgary and University of Waterloo in Canada and Dartmouth College. The prototype consists of three smartphones that fit into a single 3-D printed case, running a custom-made sharing-oriented version of Android that lets the main phone control the access the other two handsets have to different apps and monitor what’s happening on those phones, too.

The two peripheral smartphones—one medium-sized and the other quite tiny, compared to the main phone—can slide out of the case and be handed off to other people. As this video shows, when you start to slide the medium-size lendable phone out, a list of icons pops up on its display, letting the mega-phone’s owner decide how much access they want to give to the person they’re lending it to (this can range from just using a specific app, to screen sharing, to being able to use anything that’s on the main phone). The smaller phone has fewer options. The icons are triggered by near-field communication, or NFC, tags placed in these peripheral phones’ cases that interact with the built-in NFC capabilities on the main phone. 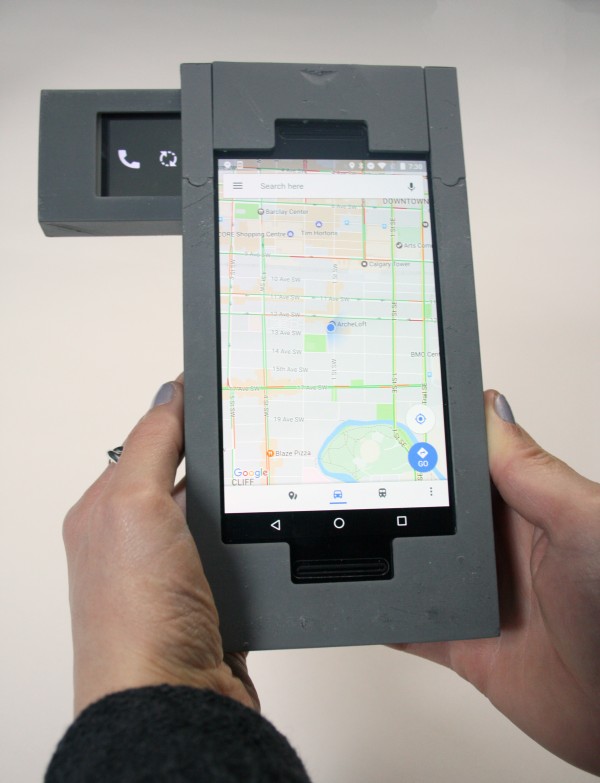 The design is still extremely clunky; as Teddy Seyed, a graduate student at the University of Calgary who’s working on the project, says, “Usually the first comment is, ‘Why would I want to carry three phones in my pocket?’”

But it forecasts a more thoughtful future in which we may be willing to give up just a bit of the power we wield over what has quickly become one of our most important possessions. Syed, the lead author of a paperon the project that will be presented at a user interface conference in October, says that parents in particular quickly realize it could be helpful for sharing the phone with their kids. And he imagines that it could be useful for other things, too, like using the phone as a multi-player video-game system.

Modular phones haven’t exactly taken off, though there have been several attempts to popularize the idea in various forms. The most ambitious thus far, Google’s Project Ara—which aimed to build a handset with removable modules for a range of functions like the camera, battery and anything else developers might come up with—shut down in 2016 without ever releasing a phone.

More recently, phones like Motorola’s Moto Z handsets and Android creator Andy Rubin’s Essential smartphone have been introduced with magnets on their rears to snap on accessories. Seyed thinks the more focused approach of these phones could work, and he sees his project as fitting into this same general area since it’s looking at modularity specifically for the sake of sharing.

It took about a year to make the first prototype, Seyed says, and he plans to begin making another version in the coming months. He hopes that eventually he’ll be able to make it into a real phone—he imagines that rather than combining three phones, this would consist of a phone that handles the bulk of the computing connected to slim, shareable display-like gadgets.

“It would be like a hot spot for other pieces, basically,” he says.