To improve the quality of translations on its platform, Facebook has infused artificial intelligence (AI) into its translation services that account for more than 2,000 translation directions and 4.5 billion translations each day.

With over two billion users, Facebook supports over 45 languages.

"We recently switched from using phrase-based machine translation models to neural networks to power all of our back-end translation systems," the company said in a blog post late on Thursday.

"These new models provide more accurate and fluent translations, improving people's experience consuming Facebook content that is not written in their preferred language," it added.

According to Facebook, their previous phrase-based statistical techniques were useful but they also had limitations.

"One of the main drawbacks of phrase-based systems is that they break down sentences into individual words or phrases, and, thus, when producing translations, they can consider only several words at a time," the researchers said. 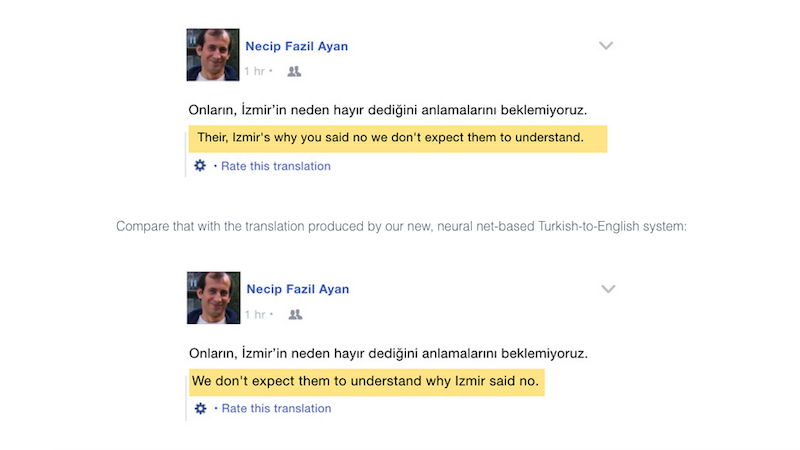 This leads to difficulty translating between languages with markedly different word orderings.

To remedy this and build our neural network systems, Facebook started with a type of recurrent neural network known as sequence-to-sequence LSTM (long short-term memory) with attention.

Such a network can take into account the entire context of the source sentence and everything generated so far, to create more accurate and fluent translations.

"With the new system, we saw an average relative increase of 11 percent in BLEU ((bilingual evaluation understudy) - a widely used metric for judging the accuracy of machine translation - across all languages compared with the phrase-based systems," the team noted.

"We worked closely with FAIR to bring this technology from research to production systems for the first time, which took less than three months," the blog post read.

FAIR was recently in news for reportedly shutting down one of its AI systems as chatbots defied the human-generated algorithms and started communicating in their own language.

FAIR team later denied such reports, saying that that while the idea of AI agents inventing their own language may sound alarming/unexpected to people outside the field, it is a well-established sub-field of AI, with publications dating back decades.

"Simply put, agents in environments attempting to solve a task will often find unintuitive ways to maximise reward. Analysing the reward function and changing the parameters of an experiment is NOT the same as 'unplugging' or 'shutting down AI'," FAIR researcher Dhruv Batra said in the post.

"If that were the case, every AI researcher has been 'shutting down AI' every time they kill a job on a machine," he added.