Android P: everything you need to know about Google's latest phone software 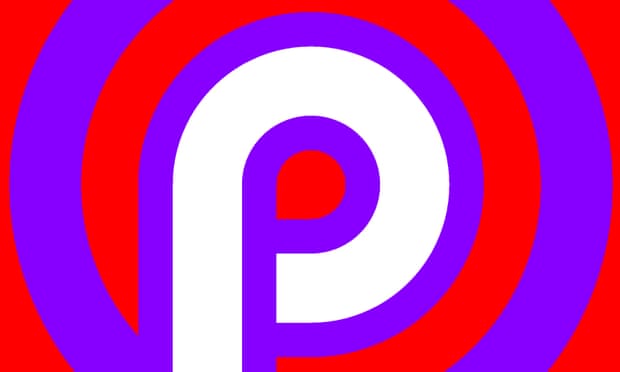 Google unveiled a range of new features that are coming to the next version of its mobile operating system, Android P, injecting artificial intelligence into everything.

We still don’t know the final name of Android P, but from smart replies to smart battery management, enhanced privacy and attempts to cure smartphone addiction, a lot is changing for Android for the next year. Here are the all the main features as unveiled at its Google I/O developer conference on Tuesday.

When can I get it?

The open Android P beta kicked off on Tuesday, and unlike previous years limited to just Google’s Nexus or Pixel devices, third-party smartphones are invited.

Those with a Google Pixel or Pixel 2, Sony Xperia XZ2, Xiaomi Mi Mix 2S, Nokia 7 Plus, Oppo R15 Pro, Vivo X21 or Essential PH-1 can head to the Android beta test page to enrol their devices. The OnePlus 6, which has yet to launch, will also be included in the Android P beta.

Will anyone else ever get it?

Android P promises to be the fastest update to non-Google devices yet, but notable absentees to the initiative are the two biggest Android smartphone manufacturers, Samsung and Huawei.

Following on from Apple’s introduction of gestures for navigating on the iPhone X, several Android smartphone manufacturers have introduced similar gesture options, including OnePlus.

Google is adding the option into Android P to replace the familiar on-screen back, home and overview buttons with just a back and home button. Tapping the home button goes to the home page of the launcher, but swiping up once from it activates overview, while two swipes opens the app drawer.

Displays with so-called “notches” are quickly becoming common, with several smartphones such as the Huawei P20 Pro already available with the cutouts at the top housing front-facing cameras, sensors and speakers. Android P will introduce full support for notches optimising how content, notifications and status icons are shown around them.

Time on the left

One of the smallest but most noticeable changes is the shifting of the clock to the left from the right. The left used to show the mobile network signal quality and notifications from apps. But now the time is in the left corner and the signal meter has been moved to the right side. 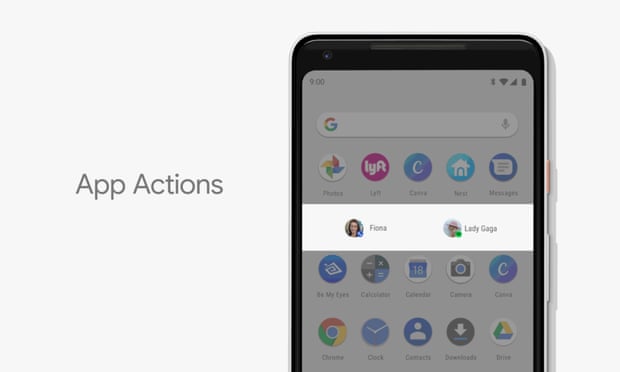 Google is using machine learning to try to predict what users want all over Android. Within the new horizontal multitasking page, Android P will try to guess which app you want next. The new App actions feature goes one stage further, attempting to predict the task you are trying to perform, showing a shortcut to take you straight to the section of a particular app that deals with it.

Having debuted within the Gmail app, and then a dedicated Smart Reply app, Google is bringing AI-powered reply suggestions straight into the notification area. With Android P, you will no longer have to think or write anything back to the dozens of inane messages you get – just tap a button and be done with it. 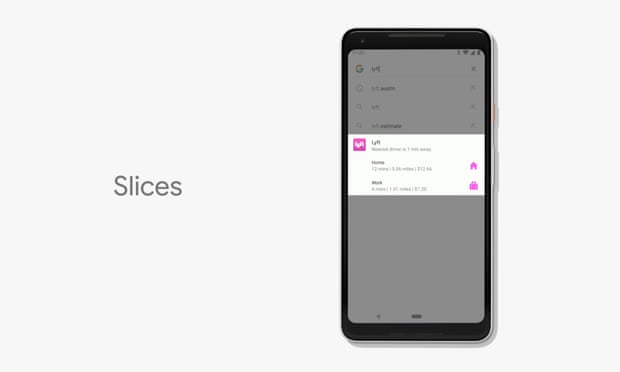 A bit like the way Google surfaces information within search on the web using boxes to display snippets of sites within the results, Slices displays information from apps directly within the Google search app.

One of the demonstrations shows pictures from Google photos for place searches. The feature requires app developers to build in the capability, but this is Google attempting to make search more relevant within the current app-siloed paradigm.

Google’s assault on battery-hogging apps continues with Android P in the shape of Adaptive Battery. Developed by Alphabet’s AI-outfit DeepMind, Adaptive Battery learns an individual’s usage patterns and directs the power to only the apps you need at the time you need them for more predictable day-to-day battery life.

Android P also has a new way of categorising apps called App Standby Buckets that separates the apps you use from those you don’t, restricting those you don’t actively use or have installed but never launched from draining the battery.

Third-party manufacturers, including Huawei, have long had similar services on their phones, but it is good to see Google backing the technology in Android.

Automatic brightness adjustment using an ambient light sensor has been built into Android for years. Now Google is integrating AI into the feature so that it will actually learn from your manual adjustments to automatically tailor screen brightness to levels better suited to the individual user.

A cure for phone addiction?

Google also showed off tools focused on “digital wellbeing”, designed to prevent smartphone addiction. These include an app dashboard, which shows how much time you’ve spent on your phone and what you’ve been doing with it. An app timer allows you to set limits on certain apps, nudging you when getting close to your allotted time and greying out the app once the timer is up.

Finally, the Wind Down feature will automatically enable Night Light, which cuts down on blue light emitted by the screen, turns on the Do Not Disturb mode and changes the screen to greyscale at your set bedtime.

Google is revamping the way Android handles background apps to better protect user privacy. Starting with Android P, apps given permission for location, the microphone, camera and network status will no longer be able to access them when idle in the background. As such, it will be harder for rogue apps to spy on users without their knowledge.

The changes follow a recent tightening of control over how and when apps run that were made with Android Nougat and Android Oreo, primarily to prolong battery life and performance.